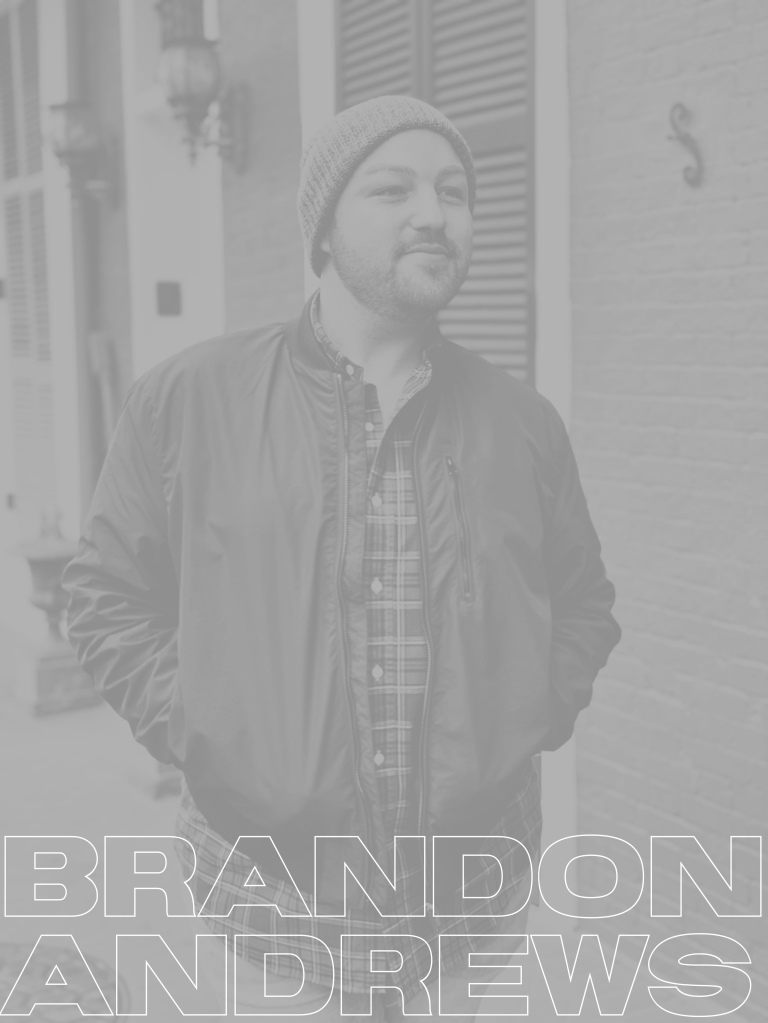 Born on the first day of 1989 and raised in south Mississippi, now residing in New Orleans, LA, Brandon is no stranger to the stage. From singing his first solos in church at a very young age, to greater stages in many states across the United States, Brandon never misses an opportunity to share his gift with others. Honoring the deep roots of his work in gospel music, Brandon Andrews brings a contagious energy and effective communication to the stage that is sure to excite audiences of any age and background.

As a 2007 graduate of Parklane Academy, Brandon spent many of his formative years active in elementary, junior high, and high school music and arts programs. Appearing as lead male actor in musical theater productions of Beauty and the Beast, Les Miserables, Seussical, and Into The Woods. As a member of the popular show choir group, Pioneer Sound, he performed onboard Carnival Cruises’ The Sensation, at the multi-award winning Haygood’s Show in Branson, MO, and many other prestigious venues. During his time at the Academy, Brandon performed his first solo in the 4th Grade, “Amazing Grace,” to a major crowd of 500 plus audience members. Beginning in his teen-years Brandon began performing the National Anthem as a regular at the Mississippi Braves minor league baseball games at Trustmark Park in Pearl, MS, and continues to perform for the team periodically throughout each season. Continuing into college, Brandon performed regularly as a spotlight vocalist at Southwest Mississippi Community College and continues to appear as an alumni performer on occasion. Music afforded Brandon many opportunities of travel and performance, including several choir appearances at the Liberty Bowl in Memphis, TN.

Brandon Andrews is no stranger to the gospel music industry. He began singing in church at an early age which quickly blossomed into a promising career in Southern Gospel music. During his early years in the industry Brandon performed at the Southern Gospel Music Fan Fair in Chattanooga, TN, the National Quartet Convention, and Abraham Productions’ mega-event, Singing In The Sun in Myrtle Beach, SC. Like many of Gospel music’s legends and current successful artists, Brandon attended the Stamps Baxter School of Music in Nashville, TN under the mentorship of the late Gaither Homecoming Music Director and lead singer of the legendary Speer Family, Ben Speer. While in Nashville, he studied under the vocal direction of the late Stephen Hill and the vocal-powerhouse performance coach, Allison Speer. Brandon has shared the stage with most all of gospel music’s supergroups as well as performing as lead vocalist of The Perrys in the Summer of 2010. In addition to an extensive touring schedule Brandon promoted several successful concert events, featuring Karen Peck & New River, Gaither Homecoming favorite The Nelons, Ivan Parker, The Talleys, Ann Downing, TaRanda Greene & The Greenes, and many more. In 2009, Brandon was selected to perform and host Nashville’s SoGo Central monthly concert series, which featured The Perrys, The Kingsmen Quartet, Mike & Kelly Bowling, and more. Brandon has recorded an extensive discography of Gospel music spanning the classics to several self-penned songs including the crowd favorite, “God’s Been Good,” and his most powerful and transparent anthem to date, “If We Could Love Like He Does.” Many of Brandon’s music tracks and vocals have been recorded at one of the industry’s premier label groups, Crossroads Records in Arden, North Carolina. Brandon continues to maintain a presence in gospel music still today, with involvement in his home-church’s, Adams United Methodist Church in Summit, MS, music department. He continues to promote and perform Gospel music at large concerts and events with his talented friends like Jeff & Sheri Easter.

Brandon shares, “Gospel music will always hold a special place in my heart. It is my first love and it’s my way of expressing my gratitude to God for His unwavering faithfulness and unconditional love.”

In 2017, Brandon went public with his intense  struggle with alcoholism. After a term in an inpatient rehabilitation and recovery center, an intensive after-care and outpatient program, and continued commitment to a Twelve Step program and fellowship, Brandon now claims his sobriety as a lifelong journey. Sharing his story, experience, strength, and hope with those who might find themselves in need is something Brandon finds necessary as a means to continue his path of progress rather than perfection. When Brandon tells his story he is quick to proclaim that it is only by God’s help he maintains his sobriety.